My Parents … A Lesson in Understanding

It is interesting to flash back through your life and realize the beginning of a new shift of thought.  I was a eight when I saw my parents as fallible for the first time.  I was cognizant of it when it occurred, and I withdrew into my own inner space afterwards.  They had made an erroneous, prejudice remark about a playmate of mine, and at that moment I realized they were human.  Children aren’t born with prejudices, they are taught.  I felt it in my ‘gut’ that they were wrong, a strong pang right under my belly button.  It was the first time I stood up and told them that their thoughts about my friend were wrong.  They changed their stance after my argument, but I’ll never forget looking at them in a different way after that.  I realized it was a lesson for me to learn about empowerment, and it has stayed with me for over 38 years.  From that point on, I was to see each individual in my life as someone that was to teach me something I needed to learn.  But my ‘gut’ was telling me more.

That was the first time I remember my Intuition kicking in.  I knew I had feelings like that before, but it was first time I put the two together.  It was powerful and unnerving.  I was only eight.  I didn’t have anyone to help me discern the emotions and feelings I had.  Talking to another adult about seeing your parents make a mistake seemed disrespectful at best.  However, with that sensation, there was also a voice that would go with it.  “They only know what they were taught,” or “Parents are only human, too, and you can forgive them, but learn from this.”  Not loud like our voices, but a whisper of sorts.

I didn’t think about it much back then, because it seemed quite normal.  A small voice.  The one that you hear when you’re inspired to do something for someone, or that tells you to drive down a street you’ve never been down before.  It was normal as a child to just listen and respond, but as I got older, I would question it, because someone else would make me feel inferior.  So, over the years, I stopped trusting those whispers.

It wasn’t until I was in my mid-thirties that I started to pay attention to those feeling or thoughts, again.  I had relied on so many other people to tell me what I should or shouldn’t be doing, so when the feelings would come and I would act upon them, my life would spin in a completely other direction.  The direction it chose was always correct.  I began to take notice.

Over a year ago, while working on my novel, I needed to know what it was like to have a reading with a psychic, since a character in my book experienced it.  So, after some research on the internet I tried a few.  It was encouraging, and I didn’t burn in Hell, as I was taught in Catholic Catechism class.  Time passed and I didn’t think much about it, until I found myself needing to get out of an unhealthy relationship, which yes, my gut told me to get out of early on, but I didn’t listen.  When I finally started to pay attention to my ‘gut’, things started to change for me.  I began to discern the situation I was in, though I was with a very manipulative person.  He would tell me I was wrong, and I doubted myself.  I needed someone to tell me if I was clearly reading my gut correctly and was he lying to me, since I couldn’t find any proof (until later!)

I found Mesina online in a very kismet way, searching for recipes for a chicken dinner.  A woman had replied that she had a better recipe, so I followed the links, until I found a link to Mesina’s website.  I stopped on her page, and that little voice said to me, “you need to know.”  So I contacted her and waited for her response.  At first I did an email reading with her.  She gave me a ten page reading that hit every single mark!  I was shocked.  Then I did telephone readings with her.  She was such an amazing mentor.  I have grown so much with her clarity and ability to see all sides of the situation.  It turned out every time I called the lying cheat out about something, I was reading the situation correctly.  He was hiding a whole other life from me.

It was a lesson about me growing to trust myself again and to never let anyone make me doubt myself again.  Do I wish I had never gone through it?  I probably wouldn’t have learned what I needed to if it was any different.  I am grateful now that I have the ability to listen more clearly on what I intuitively know.  I also have learned to journal, which has helped me with clarity and guidance.  We all have this ability within us, so it’s just a matter of finding a way to listen intently to it. 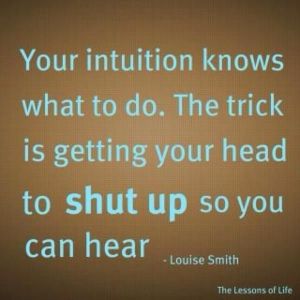 One thought on “The First Inklings of Intuition… or that sick Gut feeling!!”

This site uses Akismet to reduce spam. Learn how your comment data is processed.

Writing films that make a difference.

My Bento Box Life: Out of the Box, Into Life!

Insights on a Journey Worth Living!